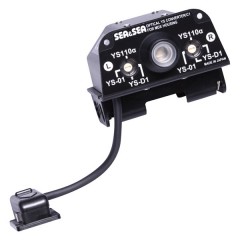 A compact unit that converts the camera's TTL signal to a light signal. The converter can be mounted on the camera's accessory shoe and can be connected to (a) SEA&SEA strobe(s) with Fiber-Optic Cable(s) (*). TTL and manual modes can be switched by pushing the mode switch on the housing.

* Sea&Sea's Fiber-Optic Cable II must be used with an Optical YS Converter.

* Malfunctions have been reported when the converters are used with other manufacturer's fiber-optic cables. Use SEA&SEA strobes and SEA&SEA Fiber-Optic Cable IIs with Optical YS Converters.

Q: How can I check remaining battery level?
A: When batteries are running low, the power/mode indicator lamp (blue or green) will start blinking. When alkaline batteries are loaded, an Optical YS Converter will operate for approximately one hour after the power/mode indicator lamp start blinking. However, remaining battery levels suddenly drop with Nickel-Metal-Hydride and similar batteries so these will not last as long.
However, SEA&SEA strongly recommends using fresh batteries after a full days diving, especially when using depleted Nickel-Metal-Hydride batteries.

Q: When the batteries are spent can I continue strobe photography by switching to manual mode?
A: No you can't.

Q: Which SEA&SEA strobes are compatible with Optical YS Converters?
A: The YS-D1, the YS-01 and the YS-110α are TTL-compatible strobes.
The YS-250 Pro strobe can be used in manual mode only (The YS-250 PRO is not TTL-compatible).

Q: When two different strobe models are connected and used in TTL mode, will each strobe automatically illuminate the subject accurately?
A: Yes. However, there may be a slight difference in brightness in accordance with shooting conditions. When shooting macro photography and/or when wide apertures are used, images may be slightly overexposed. If you demand the most accurate exposure results, using two of the same model strobes is recommended.

Q: Is the Optical YS Converter compatible with older housings not specifically designed to accommodate it?
A: No, it is not. Most, if not all SEA&SEA housings produced in the future will be compatible with one of the Optical YS Converters (such as "C1 for MDX series housings" for Canon cameras and "C1 for RDX series housings" for Canon cameras).